skip to main | skip to sidebar

The Biblical Lesson On Health Care

I consider the modern health care system to be one of the greatest frauds ever perpetrated against humanity however the scurrilous behavior of doctors today appears to have existed even back in biblical times. Mark 5:25 relates the story of a woman who for twelve years had been under the care of many different doctors who had taken all of her money while only making her condition worse.

“And a woman was there who had been subject to bleeding for twelve years. She had suffered a great deal under the care of many doctors and had spent all she had, yet instead of getting better she grew worse.”

How many people today are just like this poor woman? They suffer for years under the high priced treatment of doctors yet instead of getting better they get worse while spending all their money on nothing. What I don’t understand is how few people want to admit this reality of modern health care when the truth is so blatantly obvious. Where are the ministers and church leaders who should be speaking out about this fraud? People are suffering and being robbed of everything they own yet they say nothing critical against the main perpetrators of this crime against humanity. I think it is time that they along with everyone else take to heart the message of this biblical lesson on health care that is just as true today as it was when Jesus lived on earth.
Posted by Ben D. Kennedy at 3:12 PM 1 comment: 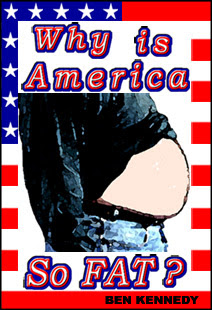 Why Is America So FAT? is the title of my first book as well as a serious question that I answered in a way that shocked a lot of people when this book was first published. As with all of my writing, this book is primarily about freedom and in particular the freedom to care for our own bodies which is supposed to be guaranteed by the Declaration of Independence and the other founding documents of our nation. What shocked so many people about the content of this book, in addition to me writing a book about weight loss in the first place, is my whole argument that the health care system and the government want people to be fat because they thrive off of the exorbitant profits derived from the health problems created by people being overweight and unhealthy. Unfortunately, I now realize that this book was way ahead of it’s time as Americans still do no believe that their leaders are so corrupt that they would intentionally destroy their fellow human beings health to line their own pockets. The proof of this is the fact that America has only become fatter and unhealthier since I wrote this book and will continue along the same tragic path until people wake up to the kind of truth about their corrupt government and health care system that I document in this book.
Google Books Preview for Why Is America So FAT?
Posted by Ben D. Kennedy at 3:22 PM 5 comments: